Charting the rise in popularity of body piercing over the course of history is a challenge for many reasons. Archaeological sites may have provided more concrete evidence if it wasn’t for the unfortunate fact that flesh has a tendency to decompose completely, taking any piercing holes with it into oblivion. Only very rarely have there been any remains found with evidence of piercing. Certain tribes are known to have worn nipple piercings as part of their ceremonial dress, for example, a nose ring with the size used to denote the wealth of the family. Ayurvedic medicine tells of the nostril being an acupuncture point, and that a nose ring could aid during the pain of childbirth. They may also have existed in ancient Egypt, but accounts are far from concrete – more so the tales of belly button rings as being exclusively for pharaohs.
There is also the small fact of the prevalence of popular myths, such as the one about roman centurions attaching their cloaks to nipple rings as fasteners. Even the most masochistic of piercing fanatics can tell you that not only would that be painful, anyone stepping on your cloak would probably end up having to deal with the pointy end of your gladius! Nipple piercing may have been seen as a statement of masculinity in Rome, however, Julius Caesar said to have had his nipples pierced as a sign of allegiance to his centurions and the Roman Empire.

Many an apocryphal nipple piercing tale appears to stem from the works of Doug Malloy – the pseudonym of one Richard Simonton. He was a Hollywood entrepreneur and businessman whose enterprises stretched from the American Theatre Organ Society for church organ enthusiasts, to the establishment of the Muzak Corporation, whose background cover versions of popular classics have been torturing elevator passengers globally since the ’40s. He played a huge part in bringing boy piercing out of the subculture by being one of its most active proponents and spinning many a tall (but entertaining) tale in the process. One thing is for certain, though – nipple piercings certainly played a big part in the shift of body-piercing into the mainstream. 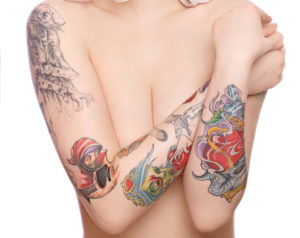 Nipple piercings involve one or more pieces of jewelry inserted into the nipple. Some variations can be created by multiple piercings in combination – limited of course by the size of the nipple. Conditions such as inverted nipples are fairly common, and this is one occasion when a piercing can be used as a corrective method to combat this cosmetic issue. Nipple piercees boast of larger, more sensitive nipples which are considered desirable by some, particularly in the case of men with small nipples. A pierced nipple can give heightened sensation during foreplay giving partners something to focus on during fun times in the bedroom.
Check our surgical steel nipple rings.

What is a septum piercing? »